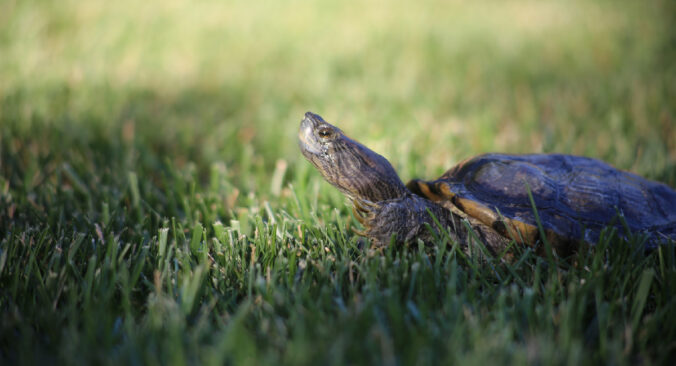 Tani is one of the animals featured in the children’s book High Paw, Super Sebastian! The story follows the journey of a foster puppy as he moves from home to home. The characters in the book are based on real animals.

“When I’m feeling shy,” said Tani, “I retreat into the safety of my shell to take a deep breath and muster some courage.”

Tani the turtle understands human emotions such as happiness and sadness much like a dog or cat would. If I’m having a rough day, he will spend more time around me, will sit on my lap and snuggle, or lay in bed to watch Netflix. When I come home from school or work, he’s the first one to run up to me! Tani knows his name and responds to it when he’s called. I never knew just how smart turtles could be until I got Tani.

My journey with Tani began in 2001 when I was eleven years old and had just arrived in Bronx, NY with my mom. I had no friends and was asking my mom to let me get a dog. No cats or dogs were allowed in the apartment and so one day, we came across a street vendor selling baby turtles. My mom suggested we get one as a pet. It was a cold September and I remember feeling sad for the turtles sitting in that cold water.

The vendor had turtles in these tiny containers with little water, ready to sell for five bucks each. On the ground was a large bucket with literally hundreds of turtles stacked on top of each other. I could see some missing eyes and limbs. It was like a swarm of turtles and I could only begin to imagine how miserable the ones at the bottom were, without being able to move, and possibly dead. The vendor passed me Tani; I saw his little eyes glittering, almost begging to come home with me. A woman nearby told us to look for abnormalities to make sure we got a healthy turtle. Tani appeared to have a “dent” in his shell and the vendor quickly tried to hand us a different turtle. I refused and held onto the container tightly. Tani and I were on the way to a whole life together. He was sold to me without any instructions — no care directions, nothing.

Since the early days, Tani has always been very outgoing, curious, and intelligent. I would let him walk around the house and he learned every room. I could call him from the bedroom and he would come running from the kitchen and straight to me. We offered a feeding container in the bathroom and Tani would walk there in the morning for breakfast and go into the kitchen to nap under the sunlight that came in through the window.

Caring for a Rescue Turtle

In the years that followed, I figured out how to best care for Tani on my own and by searching online. I heard horror stories of people dumping these little baby turtles in the garbage or flushing them down the toilet because they heard the turtles carried salmonella.  I was astounded by this because by simply washing your hands, you can remove any bacteria the animal would carry and prevent yourself from ingesting anything harmful. It is actually illegal to sell turtles under 4 inches in length in the state of New York, I later learned, because children would place the turtles in their mouths.

As the years went by, Tani thrived and grew, and I became known as the “turtle girl.” Eventually, I created Rescue Friends Inc. People started giving me the turtles they did not want and I began rescuing mistreated turtles. Many of these discarded pet turtles end up in central park in NYC. Read more about that problem here.

There needs to be serious repercussions for illegal turtle sales but laws are not being enforced and these animals are left to suffer neglect and abandonment. Tani is a red-eared slider, the most popular pet turtle in North America. Yet these animals are deemed “disposable.” Tani is very friendly towards people but is jealous of other turtles. He dislikes most turtles because he wants all the attention to himself! He enjoys eating cooked ham on holidays and loves eating chicken and shrimp. He is very animated, for example, if you attempt to feed him something really healthy, like lettuce or carrots. He tends to bite them and spit them back out, then look at me almost shocked at how we could be offering something so vile. He’s got quite the personality, that’s for sure.

As Tani grew, I did, too! I remember when I was in middle school and I would bring my best friend Tani to school with me in a hat. I was eventually caught and the principal called my mother to come to pick up Tani. Tani made guest appearances in high school and even moved to my college dorm in upstate NY with me. When I got my first job upon graduation, he moved with me then as well. Tani has been there for me for most of my life’s accomplishments these past 19 years — late night studying, graduations, birthdays, you name it! Tani is truly the best friend a girl could ask for. I’m what you’d call a “nerd.” Since coming to NY with mom, I’ve worked hard, got scholarships for college, and am now a graduate student at Columbia University. I’m finalizing my PhD in mechanical engineering and developing low-cost medical ultrasound technology. The idea is to reduce the price point of medical ultrasound from thousands of dollars down to hundreds, in order to increase worldwide accessibility to life-saving care. It’s difficult to manage school and animal rescue/rehabbing but I try to make it work because I love what I do. Learn more on my LinkedIn.

After receiving more than 15 rescued turtles over the years and also saving my first pigeon (Tutu) plus countless others from the streets of NYC, I decided to start a nonprofit: Rescue Friends Inc. We recently incorporated and my goals are to increase public awareness to reduce illegal turtle sales and to create laws that would protect pigeons.

Tiny but Fearless — Pigment Teaches Us How to Be Brave