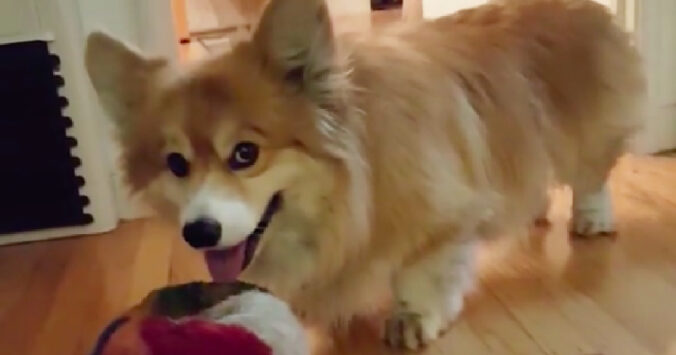 Kevin is one of the animals featured in the children’s book High Paw, Super Sebastian! The story follows the journey of a foster puppy as he moves from home to home. The characters in the book are based on real animals.

“Everyone can make a difference, no matter how small.”

Some people say that love is a four-legged word. This was certainly the experience for Monica and Eric Hedman, when a fluffy Corgi named Kevin entered their lives in 2018. Kevin didn’t seem so lovable at first, since he suffered from deep anxiety and fear due to years of bullying from other dogs, but Monica and Eric knew that some extra love and care would give Kevin a chance to shine.

It was a close call for Kevin, too, since the recommendation his previous owners received was to euthanize him. Luckily for Kevin, his owners turned to a rescue organization instead called Paws Crossed Small Dog Rescue. It was at Paws Crossed in Oakland where Monica and Eric met Kevin and knew that they had found love in the form of a Corgi.

A Walking Advertisement for the Power of Love

The funny thing about love, and about dogs especially, is that it doesn’t always show up the way we expect it, but instead appears in ways that teach us important lessons. The big lesson with Kevin was the gift of patience and perseverance. In the beginning, Kevin did not even want to be touched by humans and even fear-bit Eric. The poor Corgi was terrified. But Monica and Eric did not give up. After three months of compassionate, patient attempts, Kevin started to overcome his fear and brought a ball over to Monica so they could play fetch. This was the first time Kevin had brought a toy over to her and she knew it meant they were on the right track.

Two years later, after much rehab and love, Kevin the Fluffy Wonder Corgi (as he has come to be called) is now a happy, go-lucky pup. He loves people, loves his beach ball toy, loves playing at the dog park, and charms everyone he meets.

When Kevin shows up somewhere, it becomes an event where he is surrounded by fans. People can’t get enough of this Fluffy Wonder Corgi. There’s just something about him that inspires kindness. And Kevin is all too happy to accept the pets, affection, and treats.

This is the same ethos Kevin brings to his role in the new children’s book High Paw, Super Sebastian. In the book, Kevin is encountered by a group of animal friends who are inspired to perform an act of kindness by giving Kevin a stick. Their message is that anyone can make a difference, no matter how small, even if it’s just by brightening someone’s day.

Kevin can certainly testify to that — he brightens people’s lives on a daily basis with photos of his antics on his Instagram account. Whether it’s playing tug-of-war, playfully destroying toys (he is the master of performing squeaker-ectomies), chasing water out of the garden hose, or just romping around the garden, Kevin’s adventures add a little cheer and whimsy for his fans.

As Monica puts it, “He is a magnet to humans, has brought wonderful people into our life, and has added magic and comedy to experiences with existing friends.” She also wants people to understand the importance of breed-specific animal rescue. People will sometimes get Corgi puppies from a breeder because they are cute, then not treat them properly as dogs, so Corgis in rescue will usually have behavioral problems from lack of training, and also weight or health problems.

Monica explains, “Eric and I look for middle-aged males because they are calmer, and also because people usually want a puppy. We love the intelligence and fun of the breed. It is harder to find a Corgi in rescue than other breeds, as they are extremely popular and will often be in and out of a shelter within 24 hours. Still, we have developed a reputation in the NorCA Corgi community and the NorCA Corgi breed association as rescuers/rehabilitators of males with certain behavioral problems, so people will sometimes send us links. That is how we got Kevin.”

Kevin is a walking advertisement for the power of love. Every time he demonstrates a new action of trust or peace around Monica and Eric, it means the world.

Want to learn more about Kevin? Join in the celebration of his progress on his Instagram account @kevinthefluffywondercorgi.

Kevin’s children’s book debut is now available! High Paw, Super Sebastian is designed to help children learn about difficult emotions in a safe and gentle way. The book is available on Amazon and online retailers.

25% of the proceeds from book sales are donated to Braid Mission, an organization that provides team-based mentoring to foster youth.

Tutu Is a Pigeon Who Will Capture Your Heart