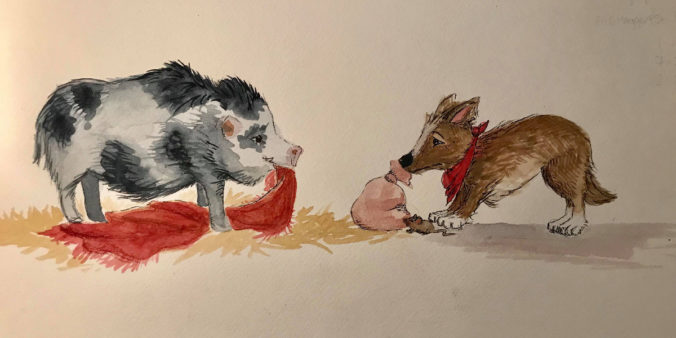 Feathered friends, therapy animals, and beloved pets are banding together to raise awareness about children in foster care. The upcoming children’s book High Paw, Super Sebastian! follows the journey of a foster puppy as he moves from home to home. Sebastian encounters various animals along the way who help him as he struggles with difficult emotions, such as fear and sadness. The goal of the book is to help children learn how to process emotions and to raise awareness about the experience of foster care for both children and rescue animals.

And there’s a twist — the characters in the book are based on real animals, many of whom help children in real life. From providing therapeutic surfing lessons to visits with miniature horses, these animals are on a mission to bring love and healing into people’s lives. Uniting as illustrated characters in a children’s book will help amplify this mission and bring joy to the children who need it the most.

Children in foster care often move several times a year, with nothing more than a garbage bag for their belongings. With each move, children experience emotions that become increasingly difficult to process. By telling their story through the narrative of a foster puppy, High Paw, Super Sebastian! provides a safe and gentle way for children to learn about an otherwise difficult topic. The story is heartwarming and fun, with colorful characters introduced along the way. Pigment is a Vietnamese Potbellied pig who needed a new home after the farm he was living at was being sold. In November of 2013 when he was one year old, he found himself moving to Ruby Ranch Pig Sanctuary. He had quite a few health issues, which were soon cleared up with vet care and he became a healthy, confident, kind leader of his very own herd. He is now 8 years old, loves his life, and is the official greeter of Ruby Ranch. His very favorite things are eating (he is a pig, after all), sleeping snuggled in his blankets with his friends, warming himself in front of a roaring fire, and exploring the farm with his friends. This 18-year-old turtle was rescued as a newborn. He was being sold illegally and was being kept in horrible conditions. He now lives a happy life and enjoys taking naps with mom and eating salmon for dinner. He loves neck rubs and when mommy comes from work, he runs up to greet her. He also knows his name and is quite the charming turtle. On his Instagram page, he helps other people see that turtles can be cute and inquisitive animals, with unique personalities and emotions. @tani.rescue This horse is tiny but she has a big personality.  Moonshadow is sweet, fearless and a little wild when she is off duty… she marches to a different drummer.  She was born during a supermoon on the first day of spring and was named by children at a hospital. Moonshadow is one of several horses at Gentle Carousel Miniature Horse Therapy. Teams of these tiny horses visit over 25,000 adults and children each year inside hospitals, hospice programs, and with families, veterans and first responders who have experienced traumatic events. @gentlecarousel This charming boy has been on quite the journey. He and his brother started out as street kittens. They were rescued by an eclectic and sweet gay couple in West Oakland. One day, Greyskull got hit by a car and lost his leg as a result. His guardians did not have the funds to cover his surgery, but a kind friend came to the rescue and paid for everything, even though she had never even met Greyskull. When the couple had to move away, belly dancer Zoe Jakes offered to adopt him and he’s had a home with her ever since! Always a lovable snuggler, Pudge is a long-haired, black and white cat who was rescued from Lakefield Animal Welfare Society. He was so depressed while he was orphaned that he would barely eat, but now he is social and curious. His favorite thing to do is give affectionate head butts to his owner and visitors. He also likes to stand guard over his rescue buddy, Odin the rat. Ricochet is the first-ever dog to surf with kids and veterans as a form of surf therapy, assistance, healing, and empowerment. She pioneered the concept of dogs surfing with kids, when in 2009, she made an independent decision to jump on a surfboard with a boy who is quadriplegic. She clearly showed the world what her life purpose is!

Since then, She has surfed with hundreds of kids with special needs, people with disabilities, wounded warriors and veterans with PTSD. @surfdogricochet Bowie is a Major Mitchell’s cockatoo who loves to dance. Due to damage to his wings a baby, he was put up for adoption as it was uncertain if he would rehabilitated and returned to the wild. In March of 2020, he took his first flight. He enjoys playing in the sunshine, bonding with his cockatiel friends, dancing, and whistling. The birds work together to raise awareness about rescues and adoption in Australia by showcasing their antics on Instagram. His favorite thing is to scream “PEEKABOO” at 4am. @cockatiel.too This costume-wearing Miniature Schnauzer loves to play dressup and offers specialized tarot readings over the Internet. Jillian enjoys long trips to the pet store (she loves to browse), collars with lots of bling, playfully chasing birds (to maintain her figure), and leisurely walks through the park. She dislikes windy days, loud noises, and cranky old cats. She has had several songs written about her including Michael Barkson’s hit “Jilly Bean” and “Hold Me Schnau” by The Terrier Twins. A goofy pigeon with a big personality. He was found injured, afraid, and unable to fly, but luckily was rescued from the streets of NYC. He loves being an indoor pigeon and enjoys playing with stuffed toys, joining his mommy in the shower for his bird bath, and taking naps in the cat bed. He also likes to build nests and is often seen “borrowing” household items such as q-tips, earrings, and car keys. Pigeons get a bad rap but they are clean, intelligent, and outgoing animals who love human affection. @tutu.pigeon Gracie is a calico cat who was adopted as an adult cat from the humane society.

She’s a complete diva, and a very spoiled, chatty, and happy cat. She’s missing her bottom baby teeth, which causes her to have a little protruding bottom lip at times that looks like she’s pouting! Poppy is just a year old and is the only girl in a house full of boys…besides her furmom that is. Poppy’s heart is as big as her ears, and her voice is even BIGGER. She’ll make sure to tell you all about it…she LOVEs to talk. She’s a bit of a trouble maker, but is still a baby, so it makes sense that she likes to get into mischief! This curious feline spent the first part of his life as a stray, but found a forever home and is now living the sweet life. He loves to take long walks on his cat leash and spend time with his human family. Kevin came from a situation where he was abused by his sister dog for six years and lived in a busy household where he was not given enough attention. He suffered from deep anxiety and did not want to be touched by humans. However, after being rescued and with much rehab and love, he now loves people, loves his beach ball toy, loves chasing and play-wrestling at the dog park, and charms everyone he sees. @kevinthefluffywondercorgi

Together We Can Make a Difference

There is power in working together and we hope that this project will be a huge success. Stay tuned for the release of High Paw, Super Sebastian! in October 2020. The book will help children and adults alike learn about emotions and will also be a fundraiser for children in foster care and in children’s hospitals. 25% of the proceeds will be donated to Braid Mission, a non-profit organization that offers team-based mentorship to children in foster care.

Watch the project unfold and get a behind-the-scenes look at the process of creating a book by following @lisa.mckaskell.artist and @greenbamboopublishing.

A Kindness Is… Interview with Simone Tielesh and Aidan Cartwright