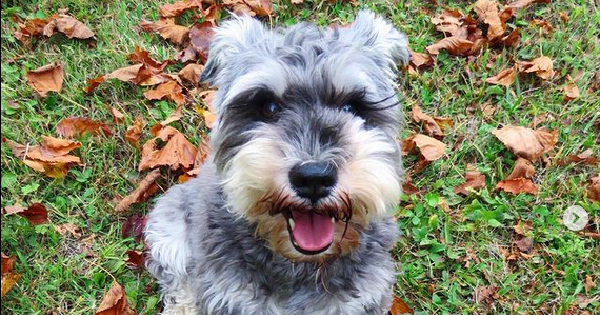 Jillian the Miniature Schnauzer Wants You to Express Yourself!

Jillian is one of the animals featured in the children’s book High Paw, Super Sebastian! The story follows the journey of a foster puppy as he moves from home to home. The characters in the book are based on real animals.

“When I’m feeling confused,” said Jillian, “I dress up in colorful costumes and remind myself that I can be whoever I want to be!”

Jillian the Miniature Schnauzer came from an award-winning lineage, but as the runt of the litter she was destined to be a different kind of show dog. Sadly, her breeders couldn’t see her intrinsic value and since she was deemed “unfit for show” they just wanted to get rid of her.

Fortunately for Jillian, one person’s underdog was another person’s superdog, and she soon found a loving home with Amy Jane Von Purr, a performance artist living in Peterborough, Ontario. Amy grew up with lots of animals in her family home, including Schnauzers, and she had always wanted a Schnauzer of her own as an adult. She researched the best way to find a Schnauzer and discovered that the dogs were mostly bred for show. She happened upon Jillian by chance — who was a show dog reject and unwanted — but when Amy saw her photo it was love at first sight. She thought, “Yep, that is the dog for me!” Amy got Jillian for her birthday and the day after she graduated from her MA program, so it was a special time in her life. She drove with her mother all the way to Ottawa in a blizzard to get this little dog. Amy’s mother held Jillian the whole way home to Peterborough in the snow storm and luckily they all made it back safe. Jillian sure was worth it, though, and the pair quickly became a dynamic duo. That same week Jillian put on her first costume and it’s been a love affair with dressing up ever since.

Jillian had a flare for the eccentric, just like Amy. She immediately loved wearing costumes because she was a total ham for the camera. When she went out in her costumes, everyone loved to stop and compliment her, which Jillian was thrilled about because she loved meeting new people to whom she could show off her sense of style.  A cute pup in a fun outfit is always a great conversation starter!

The costumes she likes the best are t-shirt type outfits. Her absolute favourite costume is her Pride ensemble, which consists of a rainbow wig and rainbow tutu. She gets tons of attention and trots around like a superstar. Clearly, nothing was going to stop Jillian from being a show dog after all! She just had to do it in her own unique way.

A Dog Who Understands Self-Expression Jillian is not only a costume-loving, purebred Miniature Schnauzer, but a powerful clairvoyant who offers specialized tarot readings over the Internet. Amy shuffles the cards and lays them out on the table. Jillian then chooses the tarot cards with her paw. Amy flips them over and finishes the tarot reading. Jillian’s tarot fans on Instagram love that she’s so involved with the process.

This creative approach to self-expression is why Jillian was chosen as a character in the newly released children’s book High Paw, Super Sebastian. Costumes can make you feel like who you really are and allow you to play and discover your identity. This aligned well with one of the main messages in the book, that you can be whoever you want to be and that it’s a beautiful thing to express yourself. For the online launch of the children’s book, Jillian and Amy attended dressed in Marilyn Monroe outfits from the movie Gentlemen Prefer Blondes — complete with blonde wigs and all! Since the launch felt like a movie premiere, they wanted to attend in style. Amy introduced Jillian as wearing “Poochie by Gucci” and everyone laughed in delight.

Jillian is a Special Kind of Miniature Schnauzer

Jillian is small even for her Miniature Schnauzer breed, but her personality is large and fabulous. She enjoys long trips to the pet store (she loves to browse), collars with lots of bling, chasing birds (to maintain her figure), and leisurely walks through the park. She dislikes windy days, loud noises, and cranky old cats. She has had several songs written about her including Michael Barkson’s hit “Jilly Bean” and “Hold Me Schnau” by The Terrier Twins. She is often mistaken for Danny Glover. She has her own Instagram account in order to showcase her diverse array of skills and talent.

She is named Jillian for three reasons: after a character in Amy’s favourite novel Practical Magic, after the pianist Jill Tracy, and because Amy’s mom had a dog named Jack (so they had Jack and Jill!).

Jillian turned seven this past August. Amy says, “She makes every single day of my life better. She’s my best friend, my familiar, my constant companion. From the time we wake up together for our morning walk to when we fall asleep cuddling each night, she enriches my life in every way in every moment of every day!”

Jillian is clearly the star of Amy’s life. She is also a constant reminder to “express yourself”. You never know the positive impact you may have on the world simply by being you.

The No Name Bunny Is A Story that Charms