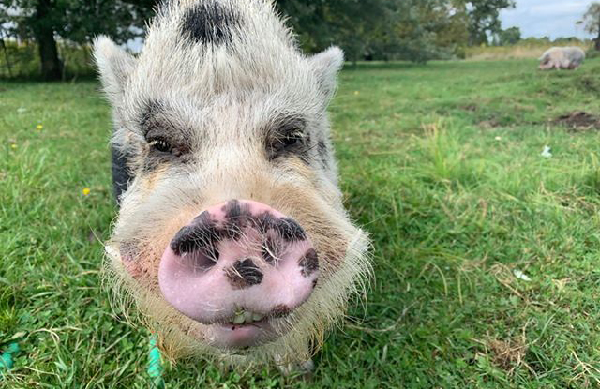 Tiny but Fearless — Pigment Teaches Us How to Be Brave

Pigment is one of the animals featured in the children’s book High Paw, Super Sebastian! The story follows the journey of a foster puppy as he moves from home to home. The characters in the book are based on real animals.

“When I’m feeling nervous,” said Pigment, “I snuggle with my blanket. It helps me feel safe and secure, calm and cozy.”

Pigment is a Vietnamese potbellied pig who needed a new home after the farm he was living at was being sold. In November of 2013, when he was one year old, he found himself moving to Ruby Ranch Pig and Farm Animal Sanctuary in Kenilworth, Ontario. He had quite a few health issues, which were soon cleared up with veterinary care and he became a healthy, confident, kind leader of his very own herd. He is now eight years old and loves his life. His very favorite things are eating (he is a pig, after all), sleeping snuggled in his blankets, warming himself in front of a roaring fire, and exploring the farm with his friends. He does not like rain, and if he happens to find himself caught in it will hurry back home, grumbling and chattering all the way. He doesn’t mind the snow too much, as long as it’s not too deep, since his little legs are only about three inches long.

His favorite treats are popcorn, any kind of fruit, and most vegetables. Don’t try and give him mushrooms or green peppers, though!

Pigment is the official greeter of Ruby Ranch. When a new pig arrives, he makes sure to introduce himself as soon as possible. He also likes to let them know that he is the boss pig! When visitors arrive, he marches right up and wants to know if they’ve brought him treats. Pigment wasn’t always so brave. He was very sick when he first arrived, underweight and suffering from mange and other ailments. He was extremely shy and nervous with the other pigs at first, but as he started feeling better, he became the most outgoing pig on the farm. Now, only tractors scare him (but can you blame him for that?).

Pigment is packed with personality. We call him a “low rider” because his legs are only about three inches long. He LOVES to chatter — he has a very unusual sound and he loves to hear his own voice. He chats with people, he chats with the other pigs, he chats when he comes inside. He’s very empathetic and befriends pigs that he knows need a friend, such as old Milo, who suffers badly from arthritis, and another pig who has passed on now named Stannie, who also couldn’t get around very well. When Stannie stopped being able to go outdoors, Pigment would go out and as soon as he came in he’d head straight for Stannie and talk his ear off, sometimes much to Stannie’s chagrin.

Pigment doesn’t like to wallow in mud, but when another pig does, he rubs up against them to share their mud. He likes making friends! He’s not much for toys, but he sure does love his blankets. He’s tiny, but fearless.

When Pigment was younger he could fit under the fence where the big farm pigs are and he would march right up to them and introduce himself, which always gave me a fright, because he was only about the size of one of their ears. Every pig here respects his authority, and every visitor to the farm falls in love with him.

Pigment lives in our house with his best girl Tavia, and five other potbellied pigs. During the day, he and the other pigs have free roam of our twelve acres. In total, his friends include twenty potbellied pigs, six large farm pigs, three sheep, three roosters, four turkeys and three cats, all rescues. That’s a lot of friends!

He has even more friends online because of his Facebook page. People from all over the world can connect with this brave, little pig!

A Kindness Is… Interview with Simone Tielesh and Aidan Cartwright