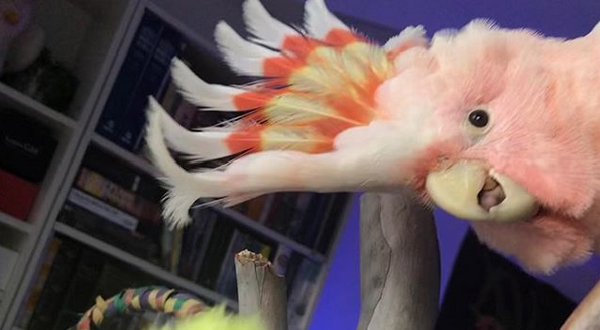 Bowie the Cockatoo Dances His Way through Life

Bowie is one of the animals featured in the children’s book High Paw, Super Sebastian! The story follows the journey of a foster puppy as he moves from home to home. The characters in the book are based on real animals.

“When I’m feeling sad,” said Bowie, “I do something fun to cheer myself up. I ruffle my feathers, strut my stuff, and dance!”

Let’s dance! Bowie is a Major Mitchell’s cockatoo who takes his namesake to heart. Despite damage to his wings as a baby bird, he doesn’t let anything stop him from dancing his way through life.

Bowie’s story is one of love and perseverance. After his wings were damaged during an attempt to clip him for hand rearing, he was put up for adoption. It was uncertain if he would ever be rehabilitated and returned to the wild, but his adoptive guardian Isabelle could tell he had a tenacious spirit. She provided Bowie with four years of strenuous rehabilitation and in March 2020 he finally took his first flight. Since Bowie had to learn at a young age that there was more to life than flying, he became an avid participant in other activities. He enjoys playing in the sunlight, whistling, bonding with his rescue bird friends, dancing (of course), and screaming PEEKABOO at 4am.

When he gets excited, he bobs around and struts his stuff. He’s often found dancing up a storm on his perch or hanging upside down in some kind of cockatoo acrobatics.

Birds of a Feather Flock Together

Bowie currently lives with four other rescue birds — Smokey and Ducky the cockatiels, Billina the chicken, and Winston the budgie. He loves his bird companions and leads a good example even if he is mischievous at times. He tries to be a bird of many talents, singing along with the cockatiels and crowing along with Billina. After all, who says a cockatoo can’t be friends with a chicken? Bowie’s motto is that friends flock together, even if we look different from one another.

The antics of these feathered friends have gathered a following on Instagram, where fans check in to see what kind of adventures the birds are up to. Bowie captures hearts with his exotic charisma and clever personality. As one fan describes him, “Bowie is so majestic and yet so silly.”

Other fans leave comments like “love your moves!” and “yeeehaw!” One thing is for certain, Bowie sure knows how to get a party started!

Bowie loves interacting with his human companions, too, although this isn’t without some adjustments. Isabelle explains, “Since he came into our lives we have truly lived as if we have a toddler. We’ve had to adapt our lifestyle to give him the best possible life we can together.”

Adapting to life with a cockatoo has been well worth it for Isabelle and her family. Bowie has learned to say many words and phrases from his near-constant interaction with his human companions. His favourite thing of all is to dance with his adoptive dad while he whistles to him. How adorable is that?

“Our house is filled with giggles, whistling, peekaboos, and other goofy happy noises,” Isabelle shares. “Bowie is also very emotionally intuitive. His companionship when life gets difficult is invaluable to us.” Bowie’s gravitation towards mentoring  — whether it be his human companions, fans on Instagram, or fellow birds — makes him perfect for his role in the upcoming children’s book High Paw, Super Sebastian. In the book he mentors a foster puppy and inspires the puppy to dance, just like Bowie would in real life. It’s this kind of can-do attitude that Green Bamboo Publishing hopes will help children in foster care, and children from all walks of life, when they read this story.

Tips for Rescuing a Cockatoo

Isabelle wants people to know that cockatoos are SMART. Bowie has the intelligence and emotional capabilities of a three year old. Isabelle’s rescue birds have taught her that regardless of species or age, each bird is an individual. Every bird has their own personality, and anyone looking to bring one home should be able to love them as they are.

Many birds suffer horribly within the pet trade. The very least we can do for the ones in our care is to give them the best life they can possibly have. The layers and attributes of a bird’s personality far exceed what we see at first glance. Regardless if you’re looking at a cockatoo, cockatiel, or a chicken; they all have their likes, dislikes and wants. Above anything else, they are more than deserving of your time, love, and attention. Even something like diet preferences can differ from bird to bird. Bowie, for instance, loves chickpeas, sweet potato, chamomile flowers, whole grain toast…  and shoes! It’s just one more fun and silly thing about Bowie that makes him the best kind of friend to have around.

If you want to learn more about this cockatoo’s life, follow Bowie and his friends at @cockatiel.too on Instagram.

High Paw, Super Sebastian will be available for purchase in October 2020. Proceeds from the book will help support Braid Mission, an organization that provides team-based mentorship to children in foster care.

Moonshadow Teaches Us that Reading Is Magic