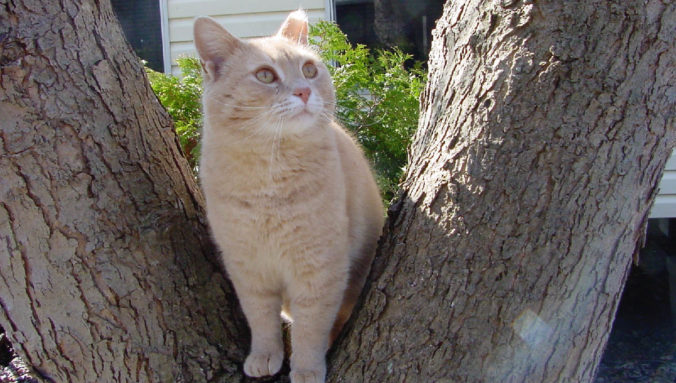 What was I Thinking, Rescuing a Cat?

Vinnie is approximately 12 years old now and loves life. We rescued each other and this is our story.

My first glimpse of Vinnie was the winter of 2012 on a very cold day at camp.

Someone threw out some leftover chili, maybe it was spicy maybe not, but Vinnie was gobbling it up like he never had anything so good in his life.

Between each bite he would chat to us from a distance.

I was thinking he was telling us of his misfortune of being homeless or lost.

I knew I would eventually reach out to help him when I returned to camp in the spring.

Vinnie is charming; he caught the attention of several people over the winter.

He was called Grumpy Cat, although he is not at all grumpy.

He was called Chatty Boy and he is.

But I called him Vinnie after Vince, an older gentleman who befriended Vinnie and approached me to help him.

Vinnie needed to get to the spay/neuter clinic asap.

We kept him in our motor home away from my cat Magellan during his recovery.

We returned him to his neighborhood where he continued to make new friends.

I was thinking that Magellan was too old to accept living with Vinnie.

And maybe I was right.

I couldn’t stand not having a pet so I took in Kelly.

Kelly would not have made it outdoors another winter and Vinnie loved being outdoors.

Vinnie even disappeared when he had a chance to move to Florida for the winter.

So Vinnie spent another winter outside at camp with the other stray cats.

In March 2014 he found his way to our doorstep.

Vinnie would be my best friend.

He would get bathed and get his nails clipped.

He would take walks with me and still be free.

When we can not be free he would walk with me on a leash or in a buggy.

He will bring happiness into my life.

And I was right.

Cindy S. Evans is a freelance writer and has several articles published in Animal Wellness Magazine. She volunteers with cat rescues and TNR programs and has helped nearly 200 cats in the past 15 years. She is also part of a songwriter duet known as ViCindy.

We Want to Feature Your Pet in a Book!