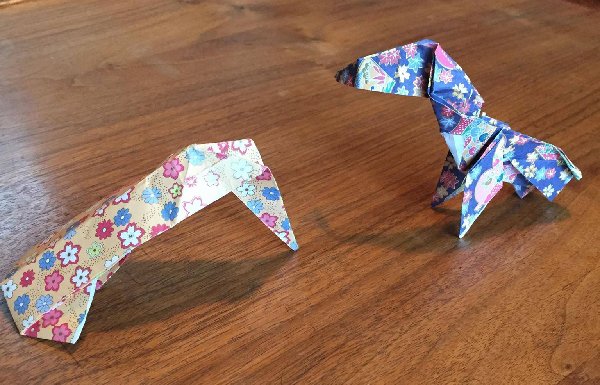 Teaching Children the Art of Failure

I once had quite the fun life lesson while trying to make an origami corgi. The evidence is below. One of these photos is how the corgi was supposed to look. The other is how ours turned out. I was babysitting an eight-year old girl, and we were 15 minutes into the 37 minute tutorial (clearly, an ambitious origami project for us) and feeling so proud of ourselves before it started falling apart. All of a sudden we couldn’t keep up. And after all the work we had been putting into it, too.

We could have gotten upset, frustrated, or disappointed, but instead total hilarity ensued. We could not stop laughing. We kept going for a while, in fits of laughter, until we were satisfied with our creations, which of course looked nothing like corgis.

We did not succeed with our project, but failing was the better experience. If we had mastered the tutorial and created perfect origami corgis instead of our wrinkled-elephant-sort-of-dog-definitely-not-a-corgi creations, I’m sure we would have felt happy and proud. But we would have missed out on all that silliness. And that silliness was the highlight of our day. Plus, it makes a far better story than “we watched a video and made a perfect corgi”.

Sometimes being a failure is better than being a master at something. I’m sure that had occurred to me before, but something about the experience with the origami corgis made this lesson really sink in for me — in a way that had immense gratitude attached to it. I was just so thankful that we failed. The experience of failing, under these conditions, was awesome.

In Western society, we place so much pressure on ourselves to “be the best” at things. And there are usually huge penalties for failing or not being good enough. But by having that attitude, we’re missing out on joyful moments. Our children are missing out on joyful moments. Because despite what we’ve been taught, failure is not always bad. It can even be better than succeeding, depending on the circumstances.

Of course, it is worthy to strive towards success, but if the scales are not balanced and the value of failure is overlooked or disregarded, then this kind of mentality becomes unhealthy and toxic.

It can even be deadly.

Research from the Interamerican Journal of Psychology found that many suicides are the result of a same day crisis, usually from the loss of or failure at something. Let that resonate. The despair and feelings of rejection from failing are so powerful that it can drive people to take their own lives. This is the effect of an unhealthy relationship with failure, usually due to no fault of the person’s own, but rather to years of toxic conditioning that teaches us to be ashamed of failing instead of embracing the value of it.

How to Teach Children the Art of Failure

It is so important that we give children the tools to master the art of failure from a very young age. We often say to our children that it is okay to make mistakes. Meanwhile, they struggle through a Western education system that places huge value on over-achieving and enacts severe penalties on failing. Outside of the education system, there is a constant emphasis through television, sports, advertisements, peers, and entertainment that success is good and failure is bad. I’m sure that most people reading this can think of several times in their lives where they felt defeated because of their failures.

As parents and educators, how do we teach children the art of failure so that they can reduce the risks of having an unhealthy relationship with failure and success?

The answer is not an easy one and will be relative to the unique personality of each child. I wish there could be easy shortcuts but this is not the world in which we live. That said, the tips below are based on 30+ years of working with a variety of children in several countries, including children with special needs and children in foster care. When faced with a daunting task, I like to remember a bit of wisdom I received years ago: doing even one thing to improve is better than doing nothing. So if even one of these tips is something you can add to your experience with children, then you are already one step further ahead than you were before.

1. Start with yourself. Children (and people in general) learn from showing, not just telling. If you have a complicated relationship with failure, your child will mimic your behaviors even if you are telling them to do the opposite.

2. Create joyful opportunities for failure. In order to learn the art of failure, children need to have opportunities to fail, but it is important for them to not associate failure with punishment. Create situations, such as a difficult craft (want to give origami corgis a try?) to give children a chance to experience failure in a safe environment.

3. Talk through emotions. Once a child experiences failure, the adult needs to lead by example by setting a positive tone, but also needs to not force these emotions on the child. Help children process the emotions that arise from failure. Have them name their feelings, ask them why they think these feelings are present. This processing helps them to understand the complexities of failure and of emotions in general, so that they can feel less confused and more grounded.

4. Learn through play. A Washington Post article that went viral in 2016 unveiled that research undoubtedly proves that humans learn faster through play than by any other method.

5. Practice tough love. We don’t like to see our children suffer. When they get sad because they are losing or have failed, instinctively we often want to “let them win”. This will not help your child master the art of failure and can even leave them unprepared for being in the real world, where they are very much going to have moments of failure. It’s okay for your child to be sad. This is part of the art of failure — honoring the difficult emotions as well as the positive ones.

6. Find a balance. Of course, we also do not want to create a situation where we never allow a child to succeed. Balance lessons of failure with lessons of success.

7. Teach the big three. As an educator and a mentor, I’ve found that the three main skills that will most likely help a child succeed in life are critical thinking, discernment, and self-worth. The experience of failure is an opportunity to teach all three. Help children identify and strengthen these traits during the process.

8. Reward children for trying. An ‘A’ for effort can be well-deserved. Are there little rewards you can offer when a child doesn’t quite succeed but has truly tried their best?

9. Tell stories. Someone I know once broke his arm from winning an arm-wrestling match. He succeeded in winning, but it would have been much better if he had failed. This story has stuck with me ever since I heard it and I use it to remind myself that success is not always worth the cost. There is power in stories; they stick with us, they resonate with us. If there are stories you can share about yourself or from people in your family — ones to which your child will relate — use them for teaching lessons about failure.

10. Make it a practice. It takes several repetitions to learn a new behavior and it is theorized that it takes 10,000 hours to master a skill. Embrace the journey and make the art of failure a regular practice. If your child can start the hours required for this practice early in life, they will have an advantage and be further ahead than most by the time they reach adulthood.

I am certain that there are points in this article where I have failed. Perhaps failed to communicate effectively or not elaborated enough on a piece of advice. There are definitely way more than ten tips I could provide. That’s okay. This is a blog post, not a book or peer-reviewed essay. I welcome you to build upon the information I have outlined here. Tailor it to your experience and even correct me if you think I’ve got any parts of it wrong. It’s all just part of the process.

And I hope you enjoy the photo of our wrinkled-elephant-sort-of-dog-definitely-not-a-corgi creations. I think they’re pretty awesome.