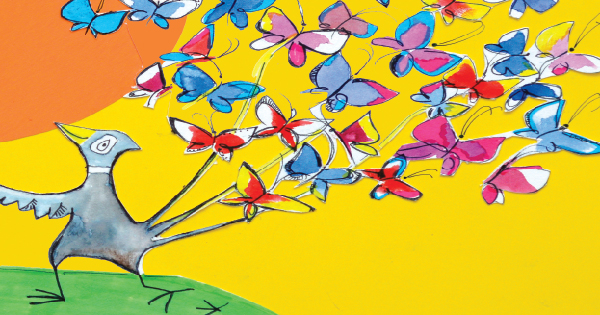 Now we can flock together!

Writing children’s books about animals is usually considered a big “don’t”. On the one hand, nobody can rival big classics such as Aesop’s Fables, The Chronicles of Narnia or Gulliver’s Travels, on the other hand, whatever is imaginable about animals seems to have already been written: from singing lice to psychologically troubled crickets; you name it, you’ll find it! Yet, sometimes things have a way of coming together on their own …

1. Struggling on a dissertation

Let’s just say that working on my dissertation in political science wasn’t the easiest thing that has ever come my way. Top that with a little daughter, whom I had to haul from activity to activity. The result was me, with my heavy bag of books in tow, finding my office space in canteens of various sports centers. One afternoon, feeling more stressed than usual, I doodled a fat pheasant with a paltry tail and a peacock with its feathers displayed as respite from my work. I liked my naïve art.

A few days later, my daughter was asked to do a poster project of an animal of her choice; would you believe she picked a peacock?! As it happens to all mothers, I became well-schooled on this animal– at least, at the second-grade level. I learned that the peacock was in the family phaianidae, as are the pheasant, turkey, partridge and grouse. It preys upon small mammals, reptiles, small snakes and insects among them, butterflies. While other birds in the phaianidae family like the pheasant are a delicacy, the peacock is rarely consumed and in some societies, revered.

3. Back to my office

I returned to my doodle of the two birds and imagined the pheasant being envious of the peacock— “aha!” fodder for a story (and another excuse for a break from the dissertation). In the hustle and bustle of the canteen, where parents chased after restless, younger siblings, it was as if I was hearing the conversation between the two birds, and seeing the myriad colorfully patterned wings of butterflies in a tree, reminiscent of the kilims I had once seen hanging in market stalls in Istanbul years ago. And so, I wrote the first draft of the tale.

Any time I have a first draft, I run it by several testers; a sort of a quality control process. One of these is my Aunty Marian, who is a kindred spirit of sorts. A lover of literature like me, she is the first to whom I send my children’s story manuscripts. I passed the test: That Thanksgiving, she intended on having pheasant instead of turkey, but after reading the manuscript, she changed her mind. She loved that I created a new animal, the pheascock, and decided to spare this new breed for the holidays, putting poor turkey back on her Thanksgiving platter.

5. Passed quality control II (and got a title for free!)

My husband is usually not very involved with my stories. But, he reads them. He liked this one. Amazed that, for once, he didn’t have anything negative to say, I asked him if he had any clue as to what the title should be (I’d been grappling with a suitable choice for a while). “The Pheasant’s Tale or …was it its Tail? what else could it be?” And so, it became.

Clearly, my daughter is one of the testers. A fairly typical representative of kids her age, she gives me a good indication of what the story’s reception might be. When I read her the story, she laughed out loud at parts, but at the end was rather pensive. As her reaction was far less than ecstatic, I put the manuscript aside and moved on.

7. The Pheascock’s return (…with vengeance and some drooling!)

A few months later, my daughter’s third-grade English teacher organized a storytelling event, whereby students were to recite their favorite tales. Unbeknownst to me, my daughter approached her teacher and asked if she could present, “The Pheasant’s Tale …or was it its Tail?” When she informed me that her teacher needed to see the text for approval, I told her that the story had yet to be published and suggested she pick another one. Little did I know that she’d already anticipated the potential issue and discussed it with her teacher, who told her that it was not a problem. I gave in and, of course, was moved to tears by my little girl’s gesture. The teacher approved it, and so she presented my tale. It was well received and met with loud applause. I wish I’d been there! At home, I asked her to recite it for me again. She had not only memorized the dialogue verbatim but also added an extra line to it. I stopped her and asked her to repeat the line: “PEACOCK! Pray pay attention; and stop drooling.” I informed her that the last part, “stop drooling,” was not in the story. “I know, I added it and my friends loved it.” I asked if I could use it. “Of course, Mamma.”

So, this is how yet another children’s book about animals came together. I hope you’ll enjoy The Pheasant’s Tale …or was it its Tail?!

You can order a copy at: http://greenbamboopublishing.com/product/the-pheasants-tale-or-was-it-its-tail/

To learn more about the author, please visit https://sites.google.com/site/candaceamarante/

8 Great Safety Tips for Biking with Your Dog This Summer