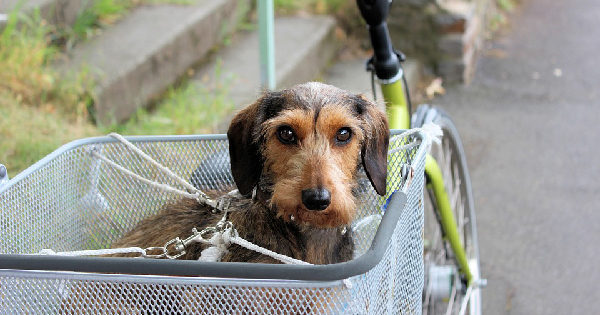 Cycling Safely with Kids and Pets

Autumn is a wonderful time for cyclists. In many places, the oppressive summer heat is letting up, giving way to a crispness and clarity in the air, and the paths and trails are emptier, save for the gentle dusting of leaves. For many cyclists, this is the best time of year. Add to that the children starting school one grade higher, and the pets (like their owners) busying themselves answering an evolutionary memory of the preparations for the coming winter, and many cyclists will find themselves biking with dogs leashed around their waists, or children towed in wagons, or even learning to ride alongside their parents.

Cycling is freedom, a blending of man with machine, and sharing that experience with a child or a pet is an unparalleled bonding experience.

However, all of that freedom must be matched by cognizance and responsibility on the part of the experienced cyclist. Sharing the road with cars (bicycles are vehicles, remember, and obey all traffic codes) can be a dangerous compromise, and a responsible cyclist will be able to ride safely, confidently, and proactively in order to participate smoothly in traffic.

While many cities have begun to develop bicycle lanes (with varying degrees of success), or even bicycle-first streets or districts, a cyclist will almost undoubtedly have to negotiate traffic with drivers as well. For instance, even with a dedicated cycling lane, drivers will have to block that lane to turn right. Similarly, cyclists will have to lane-change to the left, perhaps more than once, to make a left-hand turn. Even if every party is driving or cycling in good faith, it can be a tricky system. Consider the chaos that would ensue if drivers were able to turn right from a center lane, blocking traffic on their right. This is the daily reality for cyclists. Still, a dedicated bicycle lane is well worth the trade-off, since it keeps a clear path for cyclists who might otherwise have to weave in and out of the flow of traffic to avoid parked cars.

Ultimately, it’s every party’s responsibility to be watchful, methodical, and aware of his surroundings, but, since cyclists will be approaching the car’s flank in the case of a right-hand turn, it’s incumbent upon the cyclist to slow down, or yield the lane to the car if the car has already entered into the turn. Simply put, respectful cycling is about knowing where, when, and how to position oneself to ease traffic flow – just as it is for cars.

It’s the “how” that gets tricky. Cyclists should have a bell or horn, to announce themselves as appropriate, and to signal their moves with gestures (as was common for drivers prior to the advent of the illuminated turn signal.) For a right turn or lane change, the left arm is to be extended, bent at the elbow with the fist straight up, while a left-hand move is signaled by the left arm extended, unbent, perpendicular to the cyclist and to the bike. An unsignaled turn or lane change is an illegal turn or lane change, and a cyclist is as responsible as a motorist for obeying all applicable traffic laws.

But enough about roads. Traffic laws are dry and procedural, and, in this fine autumn weather, you’d much rather get out on the trails and paths, with your dog at your side, and your children in tow. Still, a cyclist is responsible for more than just obeying traffic laws. Cycling with pets brings on a whole host of unexpected complications and risks, and it’s up to the cyclist to anticipate them.

Dogs love to run, but many cyclists do not consider the turf or terrain that they will be leading their dog to run on. Cement, concrete, asphalt, gravel, and so on can be seriously harmful to the pads of a dog’s paws, especially at cycling speeds. If your dog is allowed to run freely, this may be less of an issue, especially if there is grass alongside the bike path, but a leashed dog may not be given sufficient scope to avoid road hazards and may be unintentionally suscepted to injury. Further, a dog on a leash, if the cyclist is unmindful, may be overrun and overexerted, which can cause cardiovascular or respiratory distress. A responsible cyclist will attend the environment, the conditions, and the state of the animal in his care.

Conversely, an animal may unintentionally unseat a cyclist, if the proper precautions are not taken. An ill-trained dog, leashed to a cyclist’s waist but suddenly chasing a wayward squirrel, can topple even the most seasoned rider with ease. Leashes are sold with embedded springs for exactly this sort of purpose, to limit the suddenness of the dog’s pull. It’s kinder to the dog, who is granted a limited scope to pull, and to the cyclist, who is less likely to be suddenly and unexpectedly destabilized.

As for children, while many parents make certain allowances when it comes to bicycle etiquette, like letting children cycle on sidewalks, any cyclist, even on training wheels, should employ the full suite of safety features. That means bells, reflectors, functioning brakes, safety-certified helmets, and a clear understanding of traffic rules.

For parents, children, or both, or just cyclists in general, it’s often best to plan a route that bypasses major streets, or takes into account difficult intersections. On smaller streets, the traffic etiquette is considerably less intensive, and there is much more leeway for pets, slower cyclists, wagons, children, and so on.

Still, despite the best of precautions, accidents do happen. A proactive cyclist is aware of his legal responsibilities, and his legal recourse in case of crash, mishap, accident, collision, or other damages. For those in California, Bay Area Bicycle Law is the leading bicycle –crash law firm, exclusively specializing in bicycle crash cases. If you have any questions about laws governing traffic, bicycles, or cyclists with pets and children, give us a call, and if you’ve been involved in a bicycle crash, our team of bicycle lawyers, with extensive experience working bicycle accident cases, can get you the help you need. Give us a call today, at (415)-466-8717, or look us up on the web at bayareabicyclelaw.com.

How Pets Can Be Reading Buddies