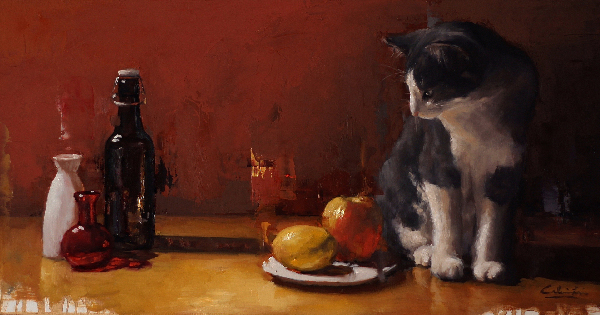 When Jojo first came into my life he was small enough to fit in my hands. He couldn’t make a sound when he meowed, and he was a little frail, but he was full of love. I adored the little grey patch on his chin and the fur behind his ears. He was actually one of the softest kittens I had ever petted, and he was my buddy from day one. Eventually, he found his voice, and his health started to improve. I taught him how to come to me when I called his name. I played fetch with him with a toy mouse. He liked to cuddle. But not all the time. Though Jojo was a very friendly kitten, he also had a wild side to him, and he let it out whenever he was in an ornery mood. I’m not sure what set him off, but there were times when you could see the look in his eyes and you had to tread carefully. He was an energetic kitten, and kittens go crazy sometimes. Or at least this one did.

Seven years later, Jojo has been my constant companion. I’ve seen him grow, change, and become one of the most unique little creatures I’ve ever had the pleasure of knowing. I’m always amazed by how much personality he has and how different he is from other cats I’ve known. So it made sense to me why I decided to do an oil painting of him even though he wasn’t my typical subject matter. But as a commission portrait artist, I’m always looking for a challenge, and I was surprised by how much the rules of painting changed and stayed the same even in the wild world of animals.

Earlier this year I was asked to participate in a group show called Cats Vs. Dogs. This exhibit, which will be on display through December 2017, is sponsored by The Vendue in association with Robert Lange Studios. The Vendue is a historic hotel in Charleston, South Carolina. It is the city’s premiere art hotel featuring high end pieces set within a first class establishment. I was honored to be asked, and I naturally thought of Jojo to be the subject of my painting.

I immediately wanted the piece to have two components; to show a glimmer of Jojo’s character, and to make it more than just a portrait painting of my special friend. I decided to expand upon the fine art genre of still life oil painting. This subject matter has been a longtime favorite of artists throughout history. Adding my cat into the composition gave this time honored form a twist. Still life with life! With all the objects placed on my desk, Jojo’s curiosity got the better of him, and he checked out everything. He especially liked to push the lemon and paw underneath the dish. Jojo played a lot with my setup as he was excited by the new change in his environment. Eventually, he became tired and decided to curl up and nap.

I took a lot of photos that evening, but most either came out too blurry, because Jojo kept moving around, or too boring, because Jojo was sleeping. I eventually settled on a reference photo of him looking intently at the fruit. I felt the shot exposed Jojo’s mischievous and sweet sides all mixed up within this one contemplative moment. What was he observing? What was he planning on doing? Was he just spacing out after being so playful? I gave a viewer the ability to come up with a narrative by creating a scene around Jojo. It’s fun to imagine what’s going on within his mind. It makes the painting more interactive.

The Difference Between Animals and People… Fur!

One of the amazing things about oil painting is its ability to create textures. As a commission portrait artist, I am constantly working to make what I paint feel like what it is. When I render skin, depending on who the subject matter is, my goal is to make it seem smooth or rough to the touch. Hair needs to feel bristly or silky. Metal needs to feel cold. Jojo is a cat who has the softest fur I’ve ever felt (except after he roles in the dirt). To make something appear soft is tricky to say the least.

When I paint I don’t like to smooth out my brushstrokes too much. Blending is one of oil paint’s great assets, but I find it needs to be done sparingly in order to be effective. In fact when it is done minimally it becomes more effective. So the solution for fur like Jojo’s is not to blend out all the rough lines. It is necessary for some parts, but blending out all the fur in order to make it appear soft makes the piece look flat.

In the beginning of the painting I started with large sections of color. I blocked out Jojo’s form and made sure to sketch out the objects within the composition. I then started to add more detail to areas I wanted as focal points, and I developed the background. It was important to make sure that Jojo, the objects around him, and the background all had a consistent sense of lighting. As the painting progressed I laid brush marks that would simulate fur. The combination of large areas of color and select brushstrokes on top made it appear as if the fur had volume and layers. The most blending I did was on some of the edges around the body in order to work well with the background. All this created the illusion of fur that was soft to the touch.

But the softness of Jojo’s fur is also enhanced by the way the objects are painted around him. The bottle, vases, dish, lemon, and apple are all hard. Of course there is variation among their textures, (glass and porcelain are smooth, lemons and apples generally have a waxy surface to them), but when you touch them they are solid. It is the contrast between these objects and Jojo that helps to bring out the softness of his fur. The contrast helps with the effect.

As I write this Jojo is lying on top of the blanket draped over my legs and curled up in a U. It’s a cold early afternoon, but my cat keeps my legs warm. He does this often, and I’m surprised he’s not pawing underneath my computer. He’s a diverse and complex little creature, and he’s been a good friend. I’m lucky to have him in my life.

A Commission Portrait Artist for Your Pet

If you are looking for a commission portrait artist in order to paint your own, or a loved one’s, cat, dog, bird, fish, hamster, or any animal, click here to find out more.

Calvin Lai’s art is a mixture of medicine, meditation, and personal growth. He found early on that drawing was something he loved, and to make a picture appear lifelike became his goal.